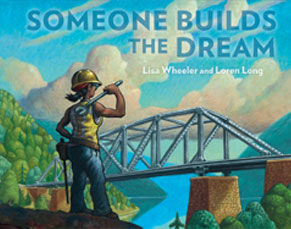 Someone Builds the Dream

Buildings, bridges, and books don't exist without the workers who are often invisible in the final product, as this joyous and profound picture book reveals from acclaimed author of The Christmas Boot Lisa Wheeler and New York Times bestselling illustrator of Love Loren Long.

All across this great big world, jobs are getting done
by many hands in many lands. It takes much more than ONE.

Gorgeously written and illustrated, this is an eye-opening exploration of the many types of work that go into building our world--from the making of a bridge to a wind farm, an amusement park, and even the very picture book that you are reading. An architect may dream up the plans for a house, but someone has to actually work the saws and pound the nails. This book is a thank-you to the skilled women and men who work tirelessly to see our dreams brought to life.

A Note from Loren...

I spent nearly a decade illustrating in the editorial market long before my first picture book. I'll never forget one phone call from a major periodical. The voice on the other end said, "Loren, this is Ken Smith from TIME magazine, I'm looking for that Loren Long/Thomas Hart Benton/ WPA thing you're doing."
TIME magazine could call any illustrator on the planet but they called me in Cincinnati because I had let a little American Regionalism seep into my art. As a young illustrator, I gravitated toward Benton's work. I loved the grand design of his compositions. His homegrown drawing style and color approach felt raw and sometimes even abrasive. But to me, his work had soul. It spoke to my sensibilities and convictions.
My favorite period in art history is the work created in America in the first half of the 20th Century which includes the Ashcan School, American Regionalism, and hundreds of WPA muralists. Their work and most notably, Thomas Hart Benton’s, will always be an important part of my artistic heritage.
The WPA (Works Progress Administration) was part of FDR’s New Deal to get America working during The Great Depression. This vast undertaking not only created nation wide construction jobs building bridges and roads but also created jobs for artists, sculptors, writers and musicians all over America.
Most importantly, I think, the WPA effort understood the essential value and self-respect a human being gets from putting in a hard day’s work. No matter what kind. This is why I instantly fell in love with Lisa Wheeler’s text for SOMEONE BUILDS THE DREAM. Her manuscript paid tribute to the skilled trades and laborers who get their hands dirty, working  every day to build dreams. Lisa’s text not only spoke to my artistic inspiration, but it spoke to the hope that we all see, respect and honor one another and the work that we individually bring to the world.
I'm blessed after all these years as an artist, to make art and tell stories that become picture books for children. But I believe the work I do alone in in my studio is no more important than the labor that goes into setting the type for my book, or running the press or packing the book into boxes and driving the truck that delivers the books to bookstores.
I believe there is dignity in all labor.
Of course, we hope for children that they can become whatever they want to be. For some, that may mean attending College and becoming an Engineer who someday designs a very important bridge. For other children, it may mean learning a skilled trade and becoming the welder who builds that bridge. Either way, my hope is that those different children grow up to respect and appreciate each other and their respective, important and necessary roles in making that dream become a bridge.
I think SOMEONE BUILDS THE DREAM will help to do just that. 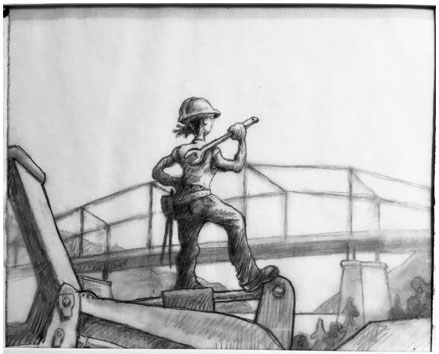